Aletha Wallace is a volunteer at Viva Salud and active in the People’s Health Movement (PHM). In her professional life Aletha works as a quality assurance compliance specialist in the supply chain and logistics of pharmaceutical products. In January, Aletha joined PHM’s WHO Watch team. Jasper Thys, policy officer at Viva Salud, interviewed her about that experience.

Can you explain to us what the WHO Watch is?

Aletha: “WHO Watch is an initiative of the People’s Health Movement (PHM) that gives health activists from all over the world the chance to closely follow the discussions and debates at the World Health Organization (WHO). Both during the World Health Assembly in May as during the Executive Board in January. The WHO Watch team attends meetings, critically observes debates, publishes statements and writes policy notes based on the findings and conclusions of the main agenda points. The WHO Watch team basically looks at the work of WHO from the critical perspective of social movements and civil society organizations. In normal circumstances, we also meet with representatives of WHO member states in Geneva but the pandemic prevented us from doing that this year. For WHO Watch, PHM closely cooperates with other organizations involved in democratizing global health policy.”

Can you briefly explain the structure of the WHO?

“The WHO is structured around its two main governing bodies, the World Health Assembly and the Executive Board. The World Health Assembly is the decision-making body and all member states have a seat. It outlines the policies of the WHO, monitors the budget and sets guidelines for the work of the Director-General, Dr. Tedros Adhanom Ghebreyesus. The Assembly meets every year in May. The WHO’s Executive Board is composed of 34 elected member states, who take a seat for a period of three years. The Board’s main duty is to implement the decisions taken by the Assembly. The Board meets every year in January.

Between January 18 and 26 the WHO’s 148th Executive Board was held. What was on the agenda?

“As we still find ourselves in a pandemic, COVID-19 understandably stood at the heart of the agenda. One of the main discussion points, for example, was the response of the WHO to this public health crisis. The Board discussed how the WHO can improve its preparedness for public health emergencies and how it can enhance its support to member states. In light of the enormous challenges that health workers and COVID-19 patients have faced during this pandemic, the Board moreover talked about the integration of mental health into preparedness and response plans for public health emergencies. We all know how much they have been affected by this pandemic. The Nagoya Protocol was also on the agenda. It contains international arrangements aimed at the exchange and sharing of important information in, among others, the domain of health. Finally, the agenda included a number of other important topics, such as patient safety, equal access to medication, the so-called social determinants of health and the funding of the WHO.”

Has the WHO assumed its important role as the leading authority in global health policy?

“Some things went well, but there is room for improvement too. The Executive Board praised the role of the WHO during the COVID-19 pandemic. Member states were satisfied with the support offered by the WHO over the last months to contain this crisis. Financial restrictions have made it very difficult for the WHO to achieve all of its objectives and projects. That is why the question was raised, during the discussions, of how the funding of WHO can be improved so it can carry out its activities in an independent way.”

What will it take to strengthen the WHO so that it can live up to its role as the leading global health authority?

“The WHO has a very extensive program and a lot of objectives, but not enough resources to implement them accordingly. Although the budget of the WHO has increased over the years, it has a number of shortcomings. 83% of the budget of the WHO comes from voluntary contributions and donors decide themselves what the funding is going to be used for. This means that the WHO cannot decide autonomously what to use this budget for. Contributions of member states only account for the remaining 17% of the total budget. The WHO can freely choose how to spend this part of the budget, but in general this system poses heavy restrictions on the WHO’s independence. That is why a task force was set up to come up with a better and more sustainable funding model for the WHO.”

What should be the WHO’s role in the worldwide distribution of vaccines for COVID-19?

“Dr. Tedros, the WHO’s Director-General has emphasized the importance of worldwide access to vaccines in his opening speech of the Executive Board in January. He even warned of a catastrophic moral failure if countries proceed with a business-as-usual approach. He said that at that point 40 million people had been vaccinated in a small number of wealthy countries while only 25 persons had been vaccinated in just one poor country. This is why the WHO is involved in a number of initiatives to work towards the equitable distribution of vaccines.

The COVAX facility, for example, was set up to give all countries equal access to vaccines. The initial plan was to firstly vaccinate all health workers and vulnerable groups across the world. But as rich countries purchased almost all vaccines that will be produced in 2021, it is very hard for COVAX to deliver on that objective. Low-income countries asked to the WHO to change this dangerous situation, but it lacks the power to force wealthy member states to share vaccines with the rest of the world.

As new strains and mutations of COVID-19 are emerging all over the world, it is crucial that these vaccines are distributed in a timely and equitable way. If we cannot make this happen, the pandemic will last longer, increase the number of deaths and slow down the economic and social recovery. This is why we believe with the WHO Watch team that more cooperation is needed within the WHO to overcome this crisis, for the benefit of us all.”

No one is safe until everyone has access to safe and effective treatments and vaccines. We all have the right to a cure. That’s why Viva Salud supports the European citizens’ initiative that wants the European Commission to do everything it can to make vaccines and treatments against coronavirus a global public good, freely accessible to all. 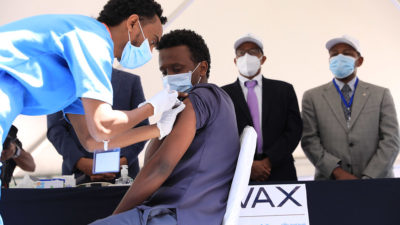 ‘If only COVAX had taken the monopoly breaking approach’

All over the world, governments have promoted COVAX as the magical solution to the pandemic. But while big pharma companies are making billions, COVAX is struggling to achieve its own modest ambitions. We spoke to expert Prasanna Saligram of People’s Health Movement (PHM) to learn about the role and challenges of COVAX. 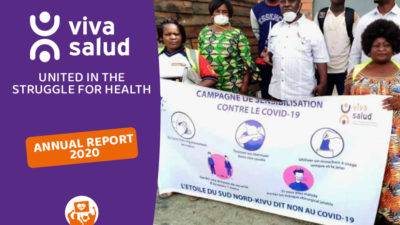 Annual report 2020 : the worldwide struggle against the coronavirus and for equal access to healthcare

In 2020, our struggle for solid public health systems was strongly shaped by the pandemic. Together with our partners, we have mobilized for greater equality in access to vaccines (as well as to health care in general) and to strengthen international collaboration. 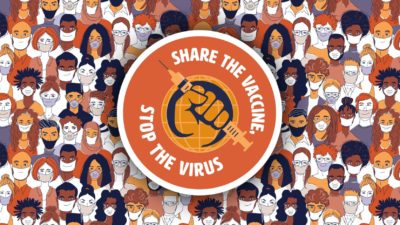 No one is safe until everyone is safe. That is why the vaccine must be a global public good, universally accessible to all. To achieve this goal, we have to take action. Share the vaccine, stop the virus.